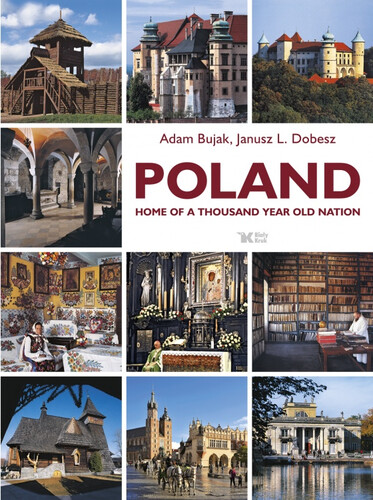 To wrap up the list of presented castles, we will mention the “Castle of the President of the Polish Republic in Wisła” – a fascinating structure for many reasons. This unusual house, rising from the southern slope of Zadni Groń in the Beskid Wiślański mountain range, was built according to a concept by Adolf Szyszko-Bohusz, who offered his services free of charge. This generous offer allowed the district government of Silesia to do away with an earlier planned bidding in the form of an architectural competition. The blueprints were ready in the summer of 1928. The mountainside seat of the Polish president was itself finished in 1930.

The fact of its being called a castle is explained by its form. Situated on a slope, it boasts a massive, buttressed and bastion-shaped, stone terrace. Traditions of defensive architecture can be seen in the presence of two towers, the use of stone wall-lining and medieval-styled details, such as arched windows or the recessing portal bearing an image of the Silesian Eagle.

Planning the interiors and furnishings, the architect entrusted to Andrzej Pronaszko – an ace of contemporary Polish avant-garde. Even today we are astounded by the boldness and maturity in taste, exhibited by the designers and even more by the investors who approved the daring and unusual, for the times, forms and colors. Brought to fruition was a set of unique metal furniture, made of wrought and chromed steel pipes, with glass or wooden shelving and tabletops, fabrics and tapestries. Standing on Poland’s “Western Frontier”, the castle was symbolically supposed to integrate Silesia with the rest of the country. It was even opened up to visitors. World War II spared the structure, even part of the original

furnishings survived. What suffered however, were the ideological values, which shined so brightly at its conception. In the 1950s it functioned as a sort of a place of political exile for, fallen from grace, party dignitaries. Later on, it became a holiday resort for the governing elites. Today, after the restoration finished in 2005, it is again the Castle of the President of the Polish Republic.

Palaces – Between Courtyard and Garden
Among all the abodes of the elites, by far the most luxurious were palaces, constructed from the end of the sixteenth century. They stood as a visual symbol of the increasing power of the magnates, whose financial – and in a short time also political – might began to rival that of the king. In the middle ages, and in the first decades of the modern era, palaces not connected with the sovereign’s person, constituted a definite minority. King Sigismund III Vasa’s transfer of the Polish capital – from Cracow to Warsaw – however, gave rise to a new kind of building initiative.
The year 1624 saw construction begin on a new royal palace in Ujazdów, near Warsaw. The architecture of this structure introduced a novel sort of palace model, often copied in the first half of the seventeenth century. We find echoes of the Ujazdów endeavor in the, devoid of a courtyard, Episcopal palace in Kielce, built in between 1637 and 1641 according to the design of Giovanni Trevano and Tommaso Poncino. Its rather stark architectural style still, belonged to the early baroque, from the generation of Sigismund III. This generation also included the commissioning Bishop of Cracow, Jakub Radzik as well as both the architects. Also built on the pattern of Ujazdów was the palace in Rydzno. Fashioned from a rebuilt fifteenth century knightly castle, it was built with a courtyard. Altered a number of times in the eighteenth century, it was finally burnt down in 1945, and rebuilt again in the years 1950-1965.
Near the end of the reign of Augustus II the Strong, in the 1720s, great popularity was gained by palaces built according to the French fashion of “between the courtyard and the garden” (entre cour et jardin), which in Poland enjoyed a tradition of its own, going back to the first half of the seventeenth century.
The most opulent of these were found in the provinces, on lands belonging to the magnates. The most exquisite of these was the so-called “Podlasie Versailles”. It was the palace of hetman Jan Klemens Branicki in Białystok, expanded in the years 1728 to 1771 by Johannes Siegmund Deybel and Johannes Heinrich Klemm.
In the times of the patronage of king Stanisław August (1732-1798), choice and elegant forms of classicism gained in prominence. The most extensive example of it can be found in the interiors of Warsaw’s Łazienki palace. By the end of the eighteenth century, fundamental changes took place in the composition of palatial structures. While during the baroque, the residential and salon spaces were usually found on the upper level (piano nobile), they were now placed on the ground floor. Second-ranking rooms were moved to the lowered upper level (mezzanino). The staircase, at one point the central and most monumental part of the lobby, was relegated to the wings, losing in that its ceremonial role. Corner pavilions and protrusions were done away with, which greatly served to solidify the edifice as well as the interiors. This type of palace enjoyed great popularity at the turn of the nineteenth century. Particularly successful examples of these can be attributed to Jakub Kubicki – the designer of, among others, the palaces in Biełaczów and Bejsce.

Alongside the rectangular shaped palace, there appeared a new variation, with a central, round, and covered with illuminated domes, salon. It referred straight back to the famous Palladio of the sixteenth century – the Rotonda villa in Vincenza. This model, introduced by Domenico Merlini in Królikarnia never gained particular popularity. It was not too comfortable, and in addition alien to Polish tradition.

The only architect said to follow Merlini was probably Stanisław Zawadzki, who in the years 1795-1800 erected the Skórzewski family palace in Lubostroń.

Floor of the rotundal hall was decorated with the crests of both the Crown and Lithuania. Its walls sported four relief sculptures: “The defeat at Płowce, suffered by the Teutonic Order at the hands of Ladislaus the Elbow-High”, “Ladislaus Jagiello’s victory over the Teutonic Order near Koronów”, “Queen Hedwig bestowing privileges on the Teutonic Order in Inowrocław in 1396” and “Marianna Skórzewska presenting the blueprints of Bydgoszcz water locks for the approval of Frederyk Wilhelm”.