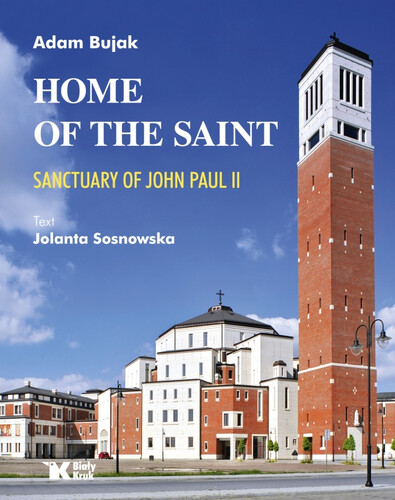 PRELATE JAN KABZIŚKI
He has returned here in his relics 8

CHAPTER 2
The Church of the Relics (Lower) 52

HOW THE SANCTUARY WAS BORN

As mentioned earlier, the ‘Have No Fear!’ John Paul II Centre is being developed in an area formed from sediments that were the byproducts of the former Solvay Soda Works. In just five-and-a-half years, five of the intended ten buildings have been built, and in that number – the two most important ones: the lower and the upper churches with numerous chapels. The Centre is surrounded by natural landscape, with nature reclaiming the White Seas. The surrounding park connects the pontifical centre to the Sanctuary of Divine Mercy spatially and visually.

On 27 May 2006, during his pilgrimage to Poland, Benedict XVI blessed the cornerstone for the construction of the John Paul II Centre. The ceremony took place during the meeting of the Pope with young people in Kraków’s Błonia common green. They also brought stones with their names and those of their hometowns in reference to the words ‘you are the rock’. A few years later, they were deposited in the foundation of the pontifical centre. The site for the construction of the Centre and the cross made from the building materials of the outdoor altar that remained from John Paul II’s last apostolic visit to Poland in August 2002, were blessed by Cardinal Stanisław Dziwisz on the Pope’s birthday (18 May) in 2007. The nine-metre-tall (30 ft) cross, weighing nearly 3 tons, was erected on the embankment opposite the field altar beside the Sanctuary of Divine Mercy.

Nearly a-year-and-a-half later, on 11 October 2008, on the eve of the 30th anniversary of the papal election of Cardinal Karol Wojtyła, construction of the centre commenced following nearly two years of preparation work. Cardinal Stanisław Dziwisz blessed the place and inaugurated the works. He encouraged all Poles and people of favourable disposition ‘to the person and mission of John Paul II’ to support the construction of the complex. ‘I am appealing to the generosity of people’s hearts: let the “Have No Fear!” John Paul II Centre be our joint work. Let everyone bring their generous personal contribution and prayer, however small, to this work.’ To establish the foundations of the building on such a difficult site, it was necessary to dig over10 m (33 ft) into the ground. The main slab of the construction, on which both the church and the remaining buildings were built, was set on poles sunk into the ground.

After the transfer of the Pope’s grave from the Vatican Grottos to the interior of the Basilica of St Peter, the marble slab that covered the grave for six years, was presented to the Centre in Kraków. It found its way to the Priests Chapel on 6 May 2011, five days after the beatification of the Polish Pope. His papal cross also made its way here. On 11 June 2011, on the power of a decree issued by Cardinal Stanisław Dziwisz, the Sanctuary of Blessed John Paul II in Kraków was erected in the White Seas. The Metropolitan Archbishop of Kraków did not conceal his emotions: ‘today, together with the Blessed John Paul II, we are entering the Centre bearing his name, and the words that became the motto of his long and difficult service – ‘“Have No Fear!”. On this day, John Paul II, in his relics, returned to Łagiewniki as a patron of the new Sanctuary.’

After the service, which was concelebrated before the field altar and presided over by the Metropolitan Archbishop of Kraków Cardinal Stanisław Dziwisz, the relics of the Pope were introduced into the sanctuary as witnessed by throngs of the congregation. President of the ‘Have No Fear!’ John Paul II Centre, an apostolic vicar, Prelate Jan Kabziński became the first Rector of the place: a better host and manager would indeed be difficult to find.

On 23 June2013, inthe presence of the Polish episcopate, Cardinal Stanisław Dziwisz performed the official rite of blessing the upper church. It was decorated with vast mosaics by the famous Italian artist of Slovenian origin, Father Marko Ivan Rupnik, SJ. So far, the main institutions of the Centre have been set up: the Sanctuary of Saint John Paul II, the Centre for Volunteer Training and the John Paul II Institute for Intercultural Dialogue, as well as the tower with panoramic terrace and belfry. The construction of the Museum is currently underway. Further stages will include the building of the Pilgrims’ House, the House of Retreat, the Conference Centre, and the Rehabilitation Centre.

The respect for the worksite of Karol Wojtyła and his worker friends in Solvay during the war is expressed in the preservation of the existing steel bridge (once a catwalk for the transport of waste) connecting the premises of the Centre to the remaining section of the White Seas. This respect for the footpath and what it stands for was carefully accounted for at the design stage of the complex.

It is the first church in Kraków to be devoted to the Polish Pope, built to honour his person and pontificate. During the beatification liturgy in Rome (1 May 2011), the remembrance of John Paul II was set on 22 October: the day when ‘a Pope from a distant country’ inaugurated his pontificate in1978 in St Peter’s Square in Rome. Starting in 2011, this has been the feast day honouring John Paul II. Thanks to the decision of Pope Francis, the Polish Pope was counted among the saints on 27 April 2014. Being the central place of the Sanctuary, the upper part of the church was built on an octagonal plan. Architect Andrzej Mikulski explains: ‘Christian symbolism awards the number eight with the significance of the “eighth day”: the Day of Resurrection; it speaks of the supernatural and eschatological reality. The history of Poland in the earliest days of Christianity was accompanied by the construction of rotund churches: built on a central plane. Also in this sense, an octagon as a centre-based form, makes reference to the days when Christianity was embraced in Polish lands. I found the historical references also important because John Paul II frequently referred to Polish history, to the history of faith and heritage of our nation.’

The architectural solutions applied also make references to the styles of architecture seen in Rome and Kraków. Andrzej Mikulski explained that ‘Kraków was an inspiration to build specific fragments of stonework, walls, cornices, plinths, and portals. These architectural “pretexts” we found not only in the city centre but also in the old part of Podgórze district, which the future Pope covered walking from Solvay towards Kraków. For example, the shape of the pillars of the main façade of the upper church makes reference to certain elements of the architecture of the district. I wanted the whole to be a friendly place, to make it a place built for/of the love of Kraków, in which “every stone and every brick were dear” to John Paul II.’

Carved in stone on the pediment over the entrance to the church were the Latin words of John Paul II, which he uttered during the inauguration of his pontificate: NOLITE TIMERE (Have no fear!), with APERITE PORTAS CHRISTO (Open the doors to Christ!) below. When you turn your back on the pediment, you have a marvellous view of the nearby Sanctuary of Divine Mercy in Łagiewniki.