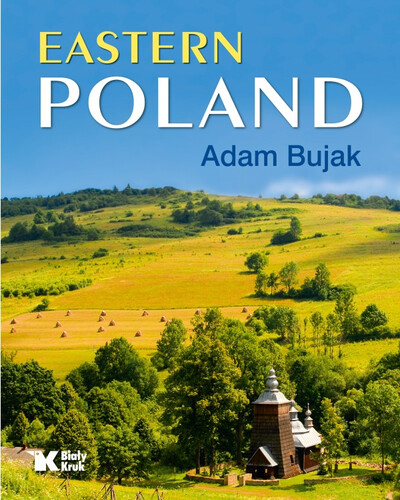 Once, they were the regions of the central and Midwestern Poland. Now, they are the eastern regions of Poland marked by varied beautiful landscapes and rich patriotic traditions. The regions were declassed and devastated regularly by the occupiers since the time of annexations. That is why, this part of Poland has been called Category B Poland....

Once, they were the regions of the central and Midwestern Poland. Now, they are the eastern regions of Poland marked by varied beautiful landscapes and rich patriotic traditions. The regions were declassed and devastated regularly by the occupiers since the time of annexations. That is why, this part of Poland has been called Category B Poland. Fortunately, it is part of the history now as the region’s economy and traditions have started to revive.

Adam Bujak, an outstanding photographer, crisscrossed the eastern region of Poland with his camera, which resulted in the publication of this enormous album, the fruit of his labour of many years. There are 440 pages with 177 pictures of towns, villages, various landscapes, natural phenomena, castles, palaces, churches and memorial sites. There are also pictures presenting customs, traditions and hard working people. There are as many as 600 pictures!

The intrinsic value of the album is the original passage written by Antoni Pacyfik Dydycz the bishop and the ordinand of Drohiczyn, who in addition to holding a Ph.D. in history is an author of books, a merited priest, a patriot and finally a son of the Podlasie region.

POLAND CAN BE EVERYWHERE 7

A NATION GRATEFUL TO WRITERS 390

In the wake of the fall of Hitler’s Germany, the decisions taken by the leaders of the winning states were principally intended to secure haul for the victors. The Soviet Union profited a lot from World War II. I obviously mean territorial gains: the country seized control of Poland’s eastern borderlands, including the Vilnius Land. Until the Third Partition, those territories and its residents had for centuries been one with the Polish Republic. Moreover, despite the Partitions, Kresy remained a spiritual and cultural monolith. The 19th century lived in hope of a revival in the spheres of culture and even religion. Some revival indeed came after World War I yet to a very limited extent. The year 1945 wiped off the past. People were forced to migrate from the east to within the new boundaries of the Polish Republic.

It is important to remember that Halych and Kievan Rus’ still harboured memories of the visit by Boleslaus the Brave and the monarch’s sword jagged while striking open the gate of Kiev. The lands were home to Saint Hyacinth, who, fleeing from Połowce, saved a statue of the Virgin Mary and the Eucharistic Substances. For centuries, Polish troops safeguarded the lands, often suffering enormous casualties during Tatar, Turkish and finally Russian invasions. These lands spawned kings, hetmans, writers and poets.

Whereas in the aftermath of World War I only part of the former Ruthenia remained unified with Poland, when it came to changing their country’s name from Rus’, the Ukrainians chose the Polish Ukraina. Russia had long invoked the affinity of the two countries, claiming erroneously a common identity. The Ukrainians did not wish to be Ruthenia as the name conjured up immediate associations with Russia. They resisted incorporation into the former empire. Many hummed nostalgically:

If only I could be a hawk-eyed eagle,

and fly over Podolia, live that life.

Is the present reality anything permanent? This question is hard to answer but one sure thing is that our common culture and historical experience could help us sweep aside the hatred fuelled by the enemy, and, every now and then, we could sit together around a fire, out there in the steppe, singing dumkas.

Kresy is more than Ukraine. The term also covers present-day Belarus. Would it be fair to forget about the land of Mickiewicz, Kościuszko, Traugutt and the grandparents and great-grandparents of those who were resettled to the west or north of Poland after 1945?

The Neman River still shimmers yearningly, as if conjuring up the centuries bygone. Let that yearning be heard in our times and last as long as it can, if only in the poetry of Stanisław Baliński, who recalls the Navahrudak Land:

…The Navahrudak land is lone:

No sheen of Hutsul embroideries…

But it keeps one secret; no, that’s not heresy –

It rustles, and wails, and plays. That is poetry:

It sighs in Belarussian and sings in Polish…

Enemy armies may trample and burn it,

They may carry away its children, ruin the households…

It whooshes in Belorussian and sings in Polish…

That cultural harmony has an attracting power. And a unifying one. This is what we experience when we visit each other. Hopefully, on gaining independence Belarus will become one of our closest neighbours, with the same closeness that was experienced by szlachta zaściankowa, the petty nobility living in plural settlements where one family lived “behind the wall” (za ścianą) of another. Because being behind the wall is being close. And this is a closeness we can share. Again, because we created certain customs together and celebrated message-laden traditions together.

The more so that both our nations are so close to the Vilnius Land, and we would hate to forget about Lithuania. Thank God it is enjoying freedom. Together we went through a lot and scrambled for liberty. The Vilnius Land is close to us for its deeply engrained Polishness. That does not mean we are going to disjoin it from Lithuania. On the contrary, we wish them heart-felt cooperation with central government. We wish them mutual understanding and respect. But we also wish the Poles in the Vilnius Land to cultivate of their forefathers’ traditions.

I remember receiving a phone call from bishop Stanisław Dziwisz some years ago, before the Holy Father travelled to Lithuania, Latvia and Estonia. I was in Rome at the time. Bishop Stanisław Dziwisz invited me to a dinner with Pope John Paul II at Castel Gandolfo. I went… I was intimidated. I knew we were going to talk, mainly about Lithuania. So I told him what I had seen. I gave a rough picture of the relations between the Lithuanian government and the Poles. We talked about culture and contemporary trends in development. I must admit I had never met such a good listener, initiating a new subject with a question from time to time. When we finished dining, the Holy Father saw me to the door, and bidding farewell confessed with some sadness (or was it bewilderment?): How come I have never been there? He was such a keen traveller after all. He was 19 when World War II broke out. The day I saw him I could feel the Holy Father lived and breathed our Kresy and remembered them.

Some of the poets or writers hailing from Kresy admit sorrowfully they will never go back to their Motherland, that their Motherland is no more. I understand that type of feeling. But I believe it is not fully justified. Why don’t we share our experiences, our customs and culture, no matter where we live? Years ago, a priest from Argentine arrived in Warsaw; he was about thirty years old. It was his first visit to Poland. His parents were exiled from Kresy to Siberia in 1940. They met in Buzuluk, where Polish troops were being formed. Together with General Anders they left the USSR. They marched through many countries, and after 1945 they got married in Naples. Several years later they emigrated to Argentina. Their son spoke impeccable Polish. He said he knew and preserved all Polish customs. When we asked how that was possible, he answered Because Poland is in our house. Not only in their house but also in their hearts.

All the Poles dispersed across the world should be constantly reminded of that. They should keep it in the back of their heads. This is what I wish for them!